A Three Peaks walker (f, 34) slipped on the last climb (the second tier) of the ascent of Pen-y-ghent, falling about 3 metres and landing on her hip. Locations given were variable, but members headed for Dale Head and Churn Milk Hole and either walked all the way up or were ferried part-way up the hill in the Honda Pioneer. Pain-relief was given to the casualty, her injuries were assessed and she was ‘packaged’ to protect her pelvis and spine, before being loaded onto a stretcher. This was then taken, very carefully, off the side of the hill, down a very steep grassy slope (rather than going down the rocky ascent path, against the flow of other walkers). Stretcher, casualty and a dozen team members arrived on the relatively level ground of Fawcett Moor, just as an air ambulance came in to land. After further assessment by the air ambulance doctor, the patient was loaded into the helicopter for the flight to hospital. Team members returned to Churn Milk Hole for a de-brief and to re-pack equipment.

Footnote: Fortunately, although in extreme pain before attention from CRO’s casualty carers and the air ambulance doctor’s concern at her partial loss of sensation in one leg, X-rays at hospital showed that the patient had not suffered any fractures, just very severe bruising. 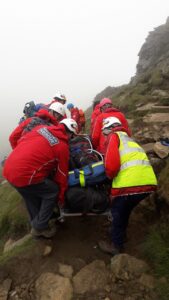 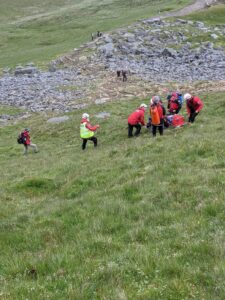 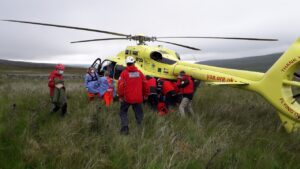