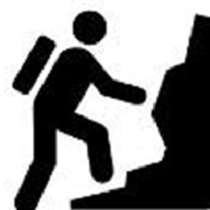 A walker (f, 37) was reported to have fallen, with a head injury at ‘top of rocks 1/4 mile past Gordale Farm Gordale Scar, but YAS had been unable to obtain a better fix as the call kept dropping out. CRO could not return the call or acquire a location using the PhoneFind app, so team members headed to both top and bottom of Gordale Scar. However, before they arrived on scene, the duty controller succeeded in speaking to the original caller because she and her injured companion had walked out from the Scar towards the farm and met the YAS ambulance crew.  The team stood down. It is understood that the walkers had been descending the waterfall scramble and the fall had occurred near the bottom.