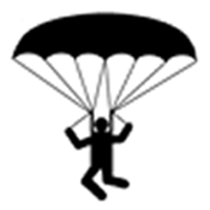 Called by North Yorkshire Police and the Yorkshire Ambulance Service to a parapentist who had lost control of his paraglider and hit the fell side. He was initially complaining of breathing difficulties and wheezing. CRO 2 and CRO 3  team vehicles were dispatched to Nick pot, picking up YAS paramedics on the way. We were also joined by the North West Air Ambulance and the Great North Air Ambulance. Having suspected spinal and pelvic injuries in addition to chest, the air ambulance crews worked together to stabilise the casualty, before he was transferred by team members to the GNAA aircraft for airlift to Preston hospital for further treatment.