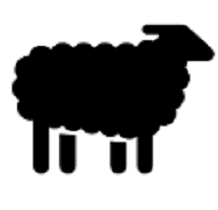 A farmer contacted the team, concerned for a pregnant ewe that had been stuck on a ledge on the quarry face since sunday. A small team responded, and were able to (eventually) bring the ewe back up to the field on top of the quarry. Being pregnant, team members weren’t able to be quite as ‘robust’ as we usually are when carrying out animal rescues. Definitely not ‘Much adewe about nothing’